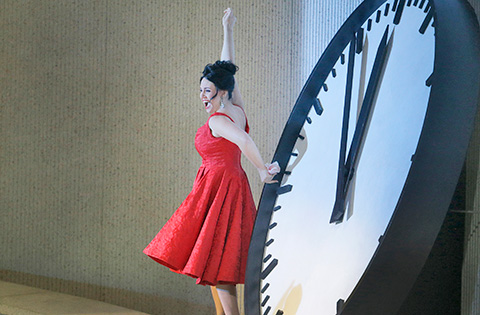 THE CRITICALLY ACCLAIMED PRODUCTION WILL BE BROADCASTED IN FOUR BULGARIAN CITIES – SOFIA, PLOVDIV, RUSЕ AND VARNA

The world-famous Bulgarian soprano Sonya Yoncheva, who was part of a Grammy nominee cast this year for Best Opera Recording, can be seen in Bulgaria thanks to Metropolitan Opera: Live from New York. The opera classics “La Traviata” with Sonya Yoncheva as Violetta Valery will be shown not only in Sofia but for the first time also in Plovdiv in the frame of Balabanov’s House Music Days, as well as in Ruse as part of the March Music Days. The highly praised staging directed by Willy Decker will be screened also at the 25th International theatre festival “Varna Summer” this June.

Plan your visit to the screenings on the following days:

Tickets for Sofia and Ruse are already available online at www.cinemacity.bg. For more information about the broadcasts in Plovdiv and Varna, follow the programme on MET Live in Bulgaria Facebook page and blog.

Metropolitan opera: live from New York is realized in Bulgaria by Via Fest Foundation and America for Bulgaria Foundation.