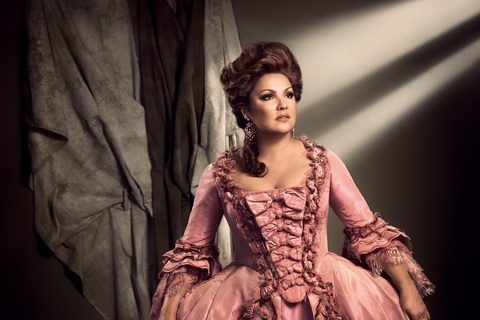 1730, Paris. The famous actress Adrienne Lecouvreur becomes the victim of love intrigues, in which an aristocratic family, a Saxon officer, a French abbot and a theatre director from the “Comédie-Française” are involved. All this is enough for the part-true, part-fiction story to capture the imagination of playwrights, poets and composers alike.

Francesco Cilea created his opera with a libretto by Arturo Colautti, who had based it on the play by Eugène Scribe and Ernest Legouvé. The premiere took place at the Teatro Lirico in Milan in 1902 – a time when the works of Giacomo Puccini and Pietro Mascagni were being applauded everywhere. The audience enjoyed “Adriana Lecouvreur” because it was rich in great operatic characters with beautiful arias and sophisticated ensemble scenes in aristocratic or theatrical settings.

The great opera diva of our time, Anna Netrebko, will take the part of Adriana Lecouvreur at the Metropolitan. This new production, directed by Sir David McVicar, coproduced with the big operas of Vienna, London, Barcelona, San Francisco and Paris, will replace the old one from season 1968/69 when Renata Tebaldi sang the leading role. The expectations are huge because of the star cast: tenor Piort Beczała sings Adriana’s beloved Maurizio, mezzosoprano Anita Rachvelishvili is the Princess of Bouillon -Adirana’s rival for Maurizio’s heart and baritone Ambrogio Maestri takes the part of the faithful Michonnet.

Anna Netrebko’s voice now has so much depth and richness – while still maintaining purity on the high notes – that listening to every moment of her singing is a thrill. (David Karlin, Bachtrack)

On the photo: Anna Netrebko in the title role of “Adriana Lecouvreur”.
Photo: Vincent Peters/Met Opera