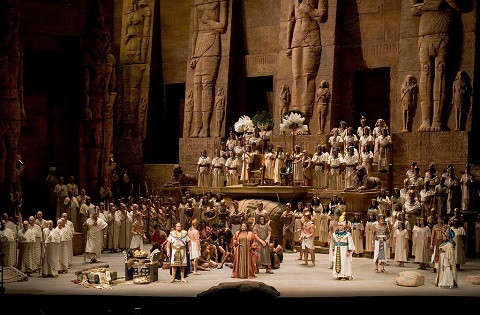 The great diva of the opera world Anna Netrebko stars again on the stage of the Met, yet for the first time in the role of Aida. She debuted triumphantly as Aida at the Salzburger Festspiele in 2017. This time the role of her rival Amneris is taken by the fiery Georgian singer Anita Rachvelishvili, and they both will be fighting for the heart of the great warrior Radames, sung by the Ukrainian tenor Aleksandrs Antonenko.

“Aida” is among the grandest of grand operas. Set in ancient Egypt during the time of the pharaohs it is packed with magnificent choruses, complex ensembles and elaborate ballets. The librettist Antonio Ghislanzoni does not specilfy precisely the historical time, but rather lets the audience experience “Aida” as a part of the Egyptian mythology.

The Met revives Sonja Frisel’s staging, which premiered in 1988 and had been compared to the spectacular productions of Franco Zeffirelli. S. Frisel is convinced that it is possible for a classical staging, when it remains truthful to its original author’s vision, to be exciting for the contemporary audiences as well. She entrusts the sets to the big scale imagination of the set designer master Gianni Quaranta. She makes use of a large chorus and a lot of extras for the mass scenes, which create the backdrop of the eternal story of the three characters torn between love and duty.

Netrebko has taken true command of this role at the first attempt. (James Imam, Bachtrack)

On the photo: A scene from Verdi’s “Aida”
Photo: Marty Sohl/Met Opera