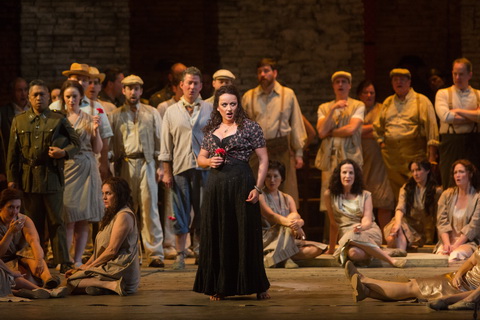 The mezzosoprano Clementine Margaine made her Met debut in 2017 in the role of the seductress Carmen. Her second invitation to take the same role in the revival of the 2009 production, directed by the eminent British director Sir Richard Eyre, is a proof for the triumph of the young French singer. Next to Margaine on the stage will sing also the renowned tenor Roberto Alagna and his wife – the soprano Aleksandra Kurzak in the role of Micaela.

Despite the scandal of “Carmen”’s premiere in 1875 at the Opéra-Comique in Paris, the opera became very popular after the early death of its composer Georges Bizet and the character of the passionate and frееdom-loving gypsy became a cultural phenomenon.

Sir Richard Eyre’s staging transfers the audience in the years of the Spanish Civil War and places its focus on the disintegrating liaison between Carmen and the madly enamored of her Don José. The spectacular production will be conducted by the French conductor Louis Langree who is Cincinnati Symphony Orchestra’s musical director.