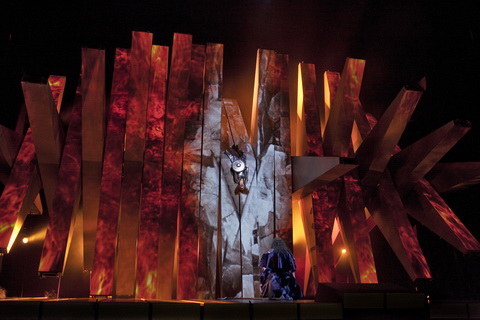 “Die Walküre” is the second opera of Richard Wagner’s monumental tetralogy “Der Ring des Nibelungen”. It has earned since long its own independent place within the world of opera, as a work of extraordinary power. It owes some of its charm to its mythological characters, who the audience finds in a decisive moment of their lives: the supreme god Wotan and his children: the twin brother and sister Siegmund and Sieglinde who are not aware of their divine and human origins, and the wilful Brünnhilde, who is one of the eight “walküries” (i.e. daughters of Wotan and the Mother-Earth goddess Erda, who gather the souls of fallen in battle warriors).

Divine and earthly worlds intertwine in some of Wagner’s most amazing melodies. Apart from being a master of musical drama from the second half of the XIX century, the German genius also used to write the librettos for his masterpieces by himself. Thus music and text had been treated with equal quality of attention.

The staging, directed by the Canadian director Robert Lepage is visual, innovative and demanding – it uses 45 tons of stage mechanisms and 24 rotating platforms, which need to move in synchronization. But not only spectacular sets are important for a presentation of a work by Wagner – the other important part are the singers and here again the Metropolitan opera has gathered a star cast.

The point is not to make this a hi-tech affair, but a poetic one.” (Robert Lepage for his staging of “Der Ring des Nibelungen” tetralogy at the Met)

On the photo: The Act 3 finale of Wagner’s “Die Walküre” with Wotan and the sleeping Brünnhilde.
Photo: Ken Howard / Met Opera