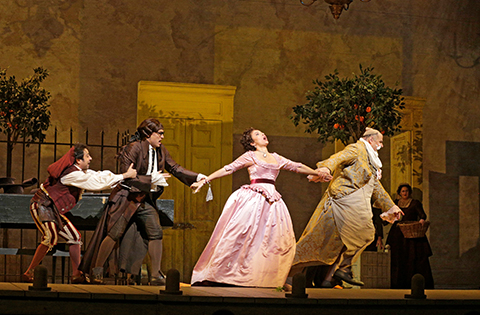 The Met’s effervescent production of Rossini’s classic comedy – featuring some of the most instantly recognizable melodies in all of opera – stars Isabel Leonard as the feisty Rosina, Lawrence Brownlee as her conspiring flame, and Christopher Maltman as the endlessly resourceful and charming barber, himself. Michele Mariotti conducts the vivid and tuneful score. “The Barber of Seville” is written after the classical comedy of the same name by Pierre Beaumarchais and nowadays is considered an absolute masterpiece in the comic genre of “opera buffa” . “The Barber of Seville” is like a chain of shining and unique musical parts. Very few are the operas, and even more so the comic ones, which contain so many adored by the general public arias, duets and ensembles. The remarkable overture is still considered one of the best in the world of opera” Liubomir Sagaev, “A Book On Opera”