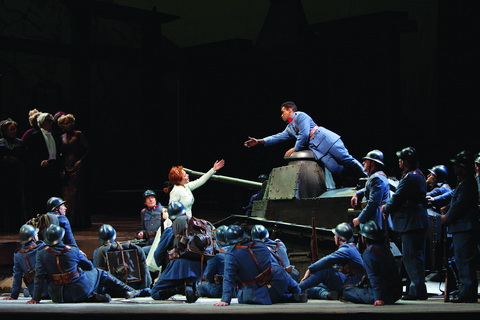 The Mexican tenor Javier Camarena is among the most distinguished interpreters of the the role of Tonio, for which the composer Gaetano Donizetti had written a serious challenge – a total of nine high C-s in a single aria, which is the opera’s most famous part and also one of the most demanding arias for tenor. In the role of “the daughter of the regiment” will be the charismatic South African soprano Pretty Yende. Together with Camarena they make fireworks of bel canto singing throwing the audiences in rapture.

The plot tells the story of a young girl who was found as baby on the battlefield and adopted by the soldiers of an entire regiment. It is partly funny, partly lyrical and follows Marie who meets her first love and has to reveal her true identity. Laurent Pelly’s stage version is filled with humor and imagination. The action is transposed to the times of the First World War. Chantal Thomas recreates on the stage the Tyrolean Mountains from geographic maps of Europe, which serve as backdrop. Donizetti’s music allows no time for boredom for characters or spectators.

This Donizetti masterpiece has become a benchmark for comic opera. (Chanda VanderHart, Bachtrack)