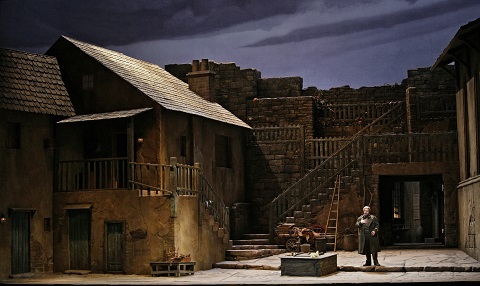 Met Music Director Emeritus James Levine conducts a revival of “Luisa Miller”, which has not been seen at the Met since 2006. The maestro again joins forces with the great star of the opera world – Plácido Domingo, who had performed with a great success the role of the young and romantic Rodolfo, but now takes the part of the old soldier Miller. The star cast is joined by the much loved by the opera fans Bulgarian soprano Sonya Yoncheva and Polish tenor Piotr Beczala. The young Russian bass Alexander Vinogradov will make his Met debut in the role of Count Walter.

A tragic fate is fallen upon the village girl Luisa – she must renounce her own happiness with her beloved and save the life of her father. Salvadore Cammarano wrote the libretto after the play by Friedrich Schiller “Intrigue and Love”. The German dramatist, who lived only 45 years, had inspired with his works a lot of operas – Verdi wrote also “Don Carlos” after his play. “Luisa Miller” was presented for the first time in 1849 and it is not considered one of the most staged works by the great master of realism and beautiful melodies. Yet it is loved by the audiences for its openness and intriguing, romantic plot, telling a story about love in the face of insuperable obstacles, about the perfidy of power, about social inequality and family affairs.

Sonya Yoncheva and Placido Domingo together on the stage of the Met.

On the photo: Scene from Verdi’s Luisa Miller.