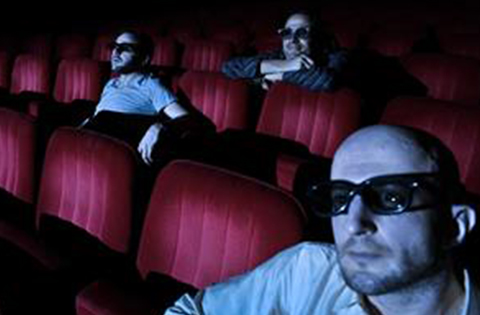 A NIGHT AT THE MOVIES

music and stories from Charlie Chaplin till David Lynch

Samuel Finzi is not only one of the most beloved actors in Bulgaria but also one of the most highly valued ones in Germany. More than 20 years ago he started his career on the German stage and in 2011 he was awarded, together with the director Dimitar Gotscheff and the actors Almut Zilcher and Wolfram Koch, the prestigious theatre prize of Berlin. He hasn’t ceased to look for challenges to himself and made up the Bulgarian-German theatre trio together with the jazzman Georgi Donchev and the composer Daniel Regenberg for “A Night at the Movies.” Whether on stage or on screen, Samuel Finzi’s talent is always fascinating. He can be everything: actor, musician, dancer… Or, to put it otherwise, an authentic jazzman of arts. In the concert show “A Night at the Movies” he gathers in an explosive whole his passion for theatre, cinema and music. His partners are the exceptional jazz musician Georgi Donchev and the young German theatre and film composer Daniel Regenberg. They lead us into a musical cinema journey with improvisations of classical songs and monologues from reels of Charlie Chaplin, via Woody Allen to David Lynch. “There are some movies that are imprinted on our minds in such manner that sometimes a story, a couple of music tones or just a wink is enough for us to recollect the magic of their images,” say the creators of the performance. “A Night at the Movies” brings that to life on the theatre stage.