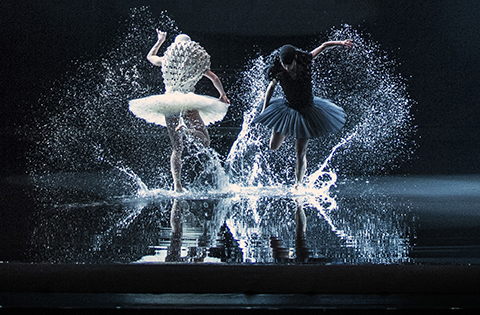 Alexander Ekman is an internationally acclaimed choreographer, recognised and sought after for his unique ability to pair wit and playfulness. With a score by Swedish composer Mikael Karlsson “A Swan Lake” takes a fresh look at Tchaikovsky’s ballet of all ballets.

Act 1 is part stage play, part dance theatre, telling the story of the very first, disastrous production of Swan Lake in 1877. The dancers of the Norwegian National Ballet are joined on stage by acclaimed actors Fridtjov Såheim and Jan Gunnar Røise, as well as soprano Elisabeth Teige from the Norwegian National Opera.

In Act 2, the stage is turned into a huge lake and the swans are given a 21st century makeover in neoprene costumes by Danish fashion designer Henrik Vibskov. The famous conflict between the White and Black Swan is played out with dramatic intensity by Norwegian National Ballet’s Camilla Spidsøe and Melissa Hough.

“I wanted to do something big and wild and different. Something with water!” said choreographer Alexander Ekman and filled the Main Stage at the Oslo Opera House with 5,000 litres of water and 1,000 rubber ducks. “A Swan Lake” was a sold-out hit by the Norwegian National Opera and Ballet, part of which is also the Bulgarian dancer Kaloyan Boyadjiev. The film has been screened at many festivals and has been honoured with several awards.

After a dance career with Royal Swedish Ballet, Cullberg Ballet and, Alexander Ekman (Sweden, 1984) decided to solely focus on choreography. He creates pieces for theatres, opera houses and museums. He also directs films and creates live performances/events in pop up locations around the world. Ekman is known for his fast paced timing, witty humor and clever transitions. He aims to create work that the majority can relate and connect with. Since 2006 he has devoted his time to creating pieces that both entertain and question the observer. He aims to transform the atmosphere in the audience and to always surprise. Ekman has created and collaborated with around 45 dance companies worldwide including the Royal Swedish Ballet, Cullberg Ballet, Iceland Dance Company, Paris Opera and many others.