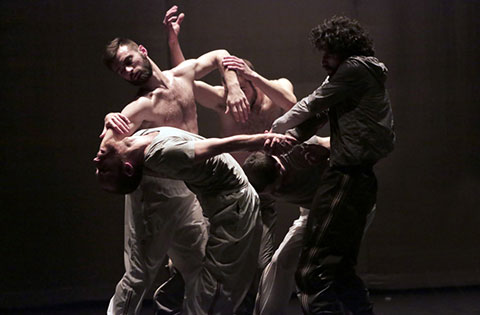 A hypnotic choreography by the “poet of dance” Fabrizio Favale

Circeo is a mountain in Italy overlooking the Tyrrhenian Sea. It’s also a mythical place where Ulysses and his companions confront Circe. Her magical power for transformation and the ever changing waters of the sea were initial inspiration for Favale’s choreography. In an extended horizon, with no usual landmarks, nine remarkable dancers go deeply into a sensual and hypnotic dance creating a slight and mutable universe. In the uncertainty between the mental and the factual, between the nocturnal and diurnal, the dancers speak a language that seems to belong more to a stormy sea. Parallel to that Fabrizio Favale and Andrea Del Bianco create live captivating sound and visual effect influencing the mood of the piece by changes in the lightning, colors and density of the atmosphere. They bring on the stage various natural elements like volcanology instruments, ice blocks, rocks, uncertain animal figures and thus invoke imagery that meets the archaic with an unspecified technological world.

The Italian dancer and choreographer Fabrizio Favale has been named “poet of dance”. In 2011 he was honored with the Medal of the President of Italy for choreographic talent. His company “Le Supplici” has performed at numerous international festivals such as La Biennale di Venezia, Festival of Edinburgh and the Lyon International Dance Biennale.