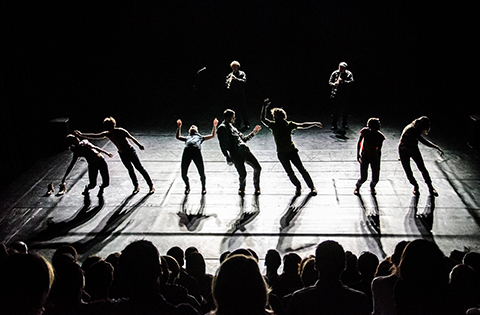 Theatre, dance and live music in an original performance about freedom and the limits for it.

“Correction” is a surprising and unusual performance created by one of the best contemporary Czech theatre makers – Jiří Havelka, together with the dancers and choreographers from VerTeDance Company and the music band Clarinet Factory.

Imagine a world where you can’t progress despite your best efforts to push forward. “Correction” proposes an image of it by putting unusual challenges and limits for the dancers. They are employed creatively and the result is a beautifully poignant piece about the lack of freedom, about reclusion and our power to make decisions. The bodies follow their reflexes; they slant and curvature pushing off, tipping and falling. Every imbalance is corrected and brought back to equilibrium. With theatrics, choreographic moments and subtle humor, the performance deals with the contradictory notions of freedom. Do we lose something, when we are free, and when does lack of freedom result in seeming relief and even conformity?

“Correction” received the award of the Czech critics for Dance Piece of the Year, 2014. Many invitations to prestigious national and international theatre and dance festivals followed. It was distinguished with the Herald Angels Award in Edinburg, with the BE Audience Award 2015 and Mess Festival Award 2015 at BE Festival in Birmingham, and it was nominated for the Total Theatre Award 2015 at the Edinburgh Fringe Festival.

Jiří Havelka is director, author and actor who is lives and works mainly in Prague. He graduated from the Directing alternative and puppet theatre program at the Academy of Performing Arts in Prague. In 2008 he received the Alfred Radok award in the category Talent of The Year and two of his early performances were nominated for the Theatre Newspaper award. He is a core member of the famous Czech alternative theatre company Vosto5. He also directed several international projects among which is a concert show of the British music band The Tiger Lilies at Archa Theatre. In 2013 he created two very original productions: “The Last Trick of Georgese Meliése” and “Brass Music”, which were in the top list for Performance of the year.

The dance company VerTeDance was founded in 2004 by Tereza Ondrová, and Veronika Knytlová, dancers and choreographers, and Pavel Kotlík, a light designer.
VerTeDance is the only Czech company to have gained three times the most prestigious Czech award in the field – Dance Piece of The Year.

The guest-performance is supported by the Czech Center – Sofia and the Ministry of Culture of the Czech Republic.