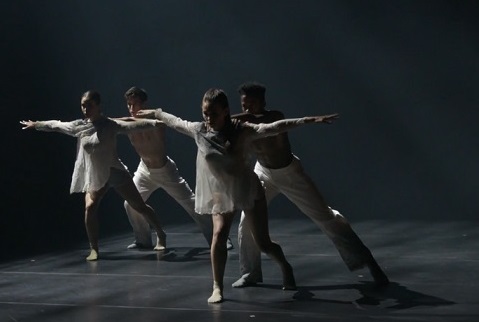 After the great popular interest provoked by the screening of Norwegian’s Opera and Ballet “A Swan Lake” by choreographer Alexander Ekman, we are pleased to present exclusively a choreographic work by Kaloyan Boyadjiev, a dancer in the production. This is the dance miniature “Sororibus” created as a part of a charity performance at the prestigious ballet theatre in Oslo.

Sororibus translated from Latin means “sisters”. The idea for the miniature is inspired by A.P. Chekhov’s drama “Three Sisters”, but the choreography does not interpret either the plot or the fate of the characters. Leading in this case are the play of associations and the desire to present the inner world of the characters, which depict three sisters, longing for a distant, unclear, and almost unattainable future.

“Without following the situations in Chekhov’s genius play, I tried to express in dance images the inner drama of the characters, caused by the impossibility of action… The meaning of life, the longing for happiness and the traps we set for ourselves – these are part of the themes inspired by the images of the three sisters, which I tried to recreate in the dance miniature “Sororibus”. Of course, unlike speech, body language is abstract, and choreography opens up a field for various forms of perception. I want the audience to empathize with my emotions; however, not to accept them as a framework, but as a starting point in a dialogue. I would be happy if through the dance I was able to unlock streams of consciousness, feelings and thoughts, different for each spectator.” Kaloyan Boyadjiev

The realization of the production as a choreography and rehearsal process was carried out in the course of one week only.

Kaloyan Boyadjiev (b. 1977 in Sofia, Bulgaria) joined the National Ballet School, Sofia, in 1986. In 1995 he started working at The State Theater Ballet Pretoria, South Africa, as a Senior Soloist until 2000. From 2000 to 2002 he danced with the National Opera and Ballet, Sofia, Bulgaria as a Soloist. In 2002 he joined the Norwegian National Ballet where he was holding a position of a Principal Dancer. In 2019 Kaloyan Boyadjiev withdrew from active carrier as a dancer and became a ballet coach. As a choreographer Kaloyan Boyadjiev has created various modern works for the Norwegian National Ballet and the classical The Nutcracker which got nominated Best Premier in Dance Europe for 2016. He is also Pretty Creatives Award Winner 2019 at the choreographic competition in Portland, USA.