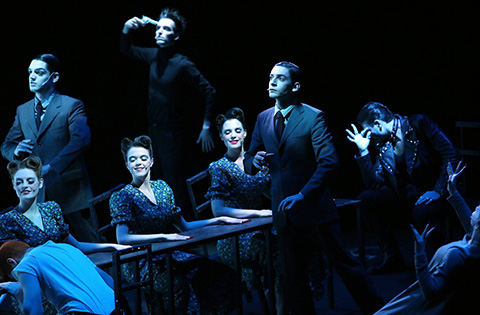 German writer, poet and highly influential playwright Heiner Müller wrote the theatre play “Hamletmachine” in 1977 as a loose translation of Shakespeare’s “Hamlet”. He called it “a pamphlet against the murderous illusion that one can remain innocent in this world”. The play became one of the most significant texts of theatre postmodernism.

Robert Wilson’s 1986 production is of great significance for contemporary theatre. Müller names it the “best production” of his play. In Wilson’s typical visual theatre’s style, the performance proceeds as a series of images provoked by the text,

The online streaming of the production is on the occasion of a workshop on “Hamletmachine” with young theatre professionals in partnership with the Goethe-Institut Bulgaria and the International Heiner Müller Society.

Round Table  Discussion: Heiner Mueller in the Bulgarian Theatre

Supported by the National Culture Fund and by Goethe-Institut Bulgaria.