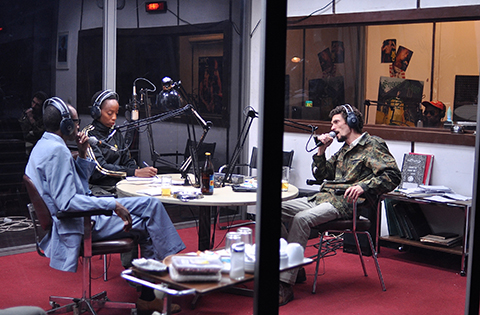 A film based on the documentary performance of the same name

World-famous director Milo Rau has consistently taken an interest in the sociopolitical conflicts from recent history and has been transforming them into material for large-scale multimedia documentary theatrical projects. In “Hate Radio” (2011) he deals with the genocide in Rwanda in 1994 when for four months extremist militaries from the Hutu ethnic group murdered almost a million Tutsis and moderate Hutus. This is one of the most brutal genocides in the world after the end of the Cold War. Milo Rau is interested not only in the facts; he mostly strives to penetrate into the roots of the extremist mind-set and the mechanisms of the propaganda that foments it. For this reason in “Hate Radio” the director traces the role of the Radio-Télévision Libre des Mille Collines (RTLM) radio station in the capital Kigali which, in the words of US journalist Philip Gourevitch, prepared the genocide for months alongside the pathos of an election campaign.

“Hate Radio” is a re-enactment of a hour’s broadcast from the studios of RTLM. Pleasant announcers and cool music, punctuated by cheerful messages which include incitements to racist murder. All very relaxed and performed with great authenticity on the basis of original sources, interviews and court transcripts by five Rwandan/Belgian actors several of them are themselves survivors of the genocide. The film “Hate Radio” is based on the stage production that premiered in 2011 at Hebbel am Ufer Theatre in Berlin.  The performance has been shown on some of Europe’s leading stages, became part of the selection of the Theatertreffen Festival in Berlin, of the Avignon Festival and others.

Critics called him „the most influential“ (DIE ZEIT), „most awarded“ (Le Soir), „most interesting“ (De Standaard) or „most ambitious“ (The Guardian) artist of our time: The Swiss director and author Milo Rau (b. 1977)  studied Sociology, German and Romance languages and literature in Paris, Berlin and Zurich under Pierre Bourdieu and Tzvetan Todorov, among others. Since 2002, he has put out over 50 plays, films, books and actions. His productions have appeared at all of the major international festivals, including the Berlin Theatertreffen, the Festival d’Avignon, the Venice Biennale Teatro, the Wiener Festwochen and the Brussels Kunstenfestivaldesarts, and have toured more than 30 countries worldwide. Rau has received many honours, most recently the Peter-Weiss-Prize 2017, the 3sat-Prize 2017, the 2017 Saarbrucken Poetry Lectureship for Drama and, in 2016, the prestigious World Theatre Day ITI Prize, as youngest artist ever after Frank Castorf and Pina Bausch. In 2017, Milo Rau was voted “Acting Director of the Year” in the critics’ survey conducted by the Deutsche Bühne. In 2018 he received the European Theatre Prize, and in 2019 he was awarded the first honorary doctorate by the Theatre Department of Lunds Universitet (Sweden). Rau is also a television critic, lecturer and a very productive writer. Since the beginning of the 2018/19 season he is artistic director of the NTGent.