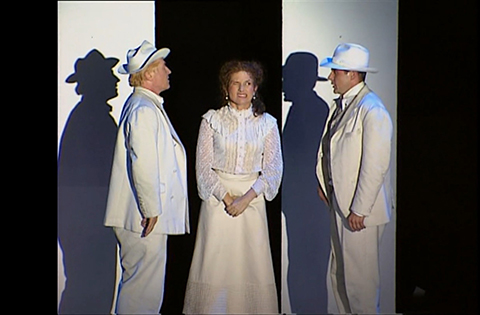 Scenes and episodes by A. P. Chekhov

The performance “Haus No. 13” takes us back to the 1990s and to Stefan Moskov’s stage work in Germany when he won the German critics and audience by his acting theatre. The young Samuel Finzi shines in it by his exceptional artistry, vigor and talent for improvisation, together with two more celebrated actors from Thalia Theatre.

A woman – two men. A woman. Two men. A man and a woman. In changing configurations Victoria Trauttmansdorff, Samuel Finzi and Hans Jörg Frey pass with ease from one scene to another in a poetic & comical  and dynamic collage of Chekhov’s plays, short stories and fragments referred to as “a score of the tragicomical” by the critics (Spiegel Magazine). Their characters are crazy of love and jealousy, self-pity and melancholy, anger and powerlessness, of the uselessness of all actions and the longing after what they cannot get – in Russian province and everywhere in an imperfect world. Without any illusions and with love Anton Chekhov describes his powerless characters who are always revolting against the established ways, trying to cunningly derive any benefit from life and escape their existence.

In 1997, Stefan Moskov staged this funny grotesque based on Chekhov’s texts on the TiK stage at Thalia Theater with three fabulous actors and comedians, three chairs, several movable walls and jazz music by Antoni Donchev.

Stefan Moskov graduated puppet directing at the National Academy for Theatre and Film Art, Sofia, Bulgaria in 1985. He specialized at the Accademia d’Arte Dramaticca in Rome in 1992 . In 1990 he founded First Private Theater “La Strada” which lasted for some years. Between 1993 and 1996 he shot 9 episodes of the TV satirical show “The Street”, awarded with “Golden Rose of Criticism” in Montreux Festival in 1996. In 1995 he began to stage plays in German theaters – some of the plays are: “Cyrano de Bergerac” in Hamburg , “Sleeping Beauty” in Stuttgart , “King Stag” in Darmstadt . In 2002 he shot feature film ” Rhapsody in White ” together with Maya Novoselska and Samuel Finzi and in 2006 the documentary “The Interpreter of black and white films.” Stefan Moskov has been staging plays at some of the most important Bulgarian theatres and for his works he has won many awards.