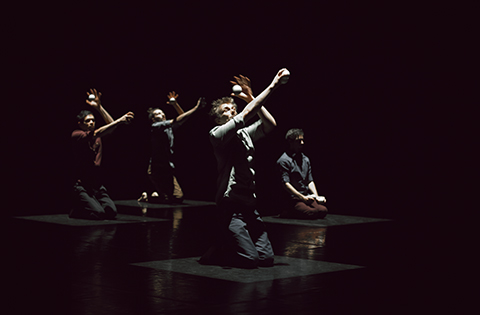 CLÉMENT DAZIN OPENS TO JUGGLING NEW PERSPECTIVES FOR THE STAGE.

What prompts the juggler to keep on sending balls into the air when he knows they would fall back to the ground? The parallel between the endless work of the juggler and the myth of Sisyphus is obvious; this paradox exists in every craft.

“Humanoptere” by young juggler and director Clément Dazin stages a microsociety composed of seven jugglers, in which appear complex exchanges. The visual power of balls in space and the fragility of human beings get together magnificently. The repetition of an action ad absurdum is the driving force of a continuing impetus toward virtuosity. This unusual show offers an allegorical vision of notions as work, success, productivity and efficiency.

“My goal is to give an allegorical vision of the multiple meanings and perceptions of work in our society by a demanding work of the body and an advanced juggling technique…  I think the show will partly be a praise of slowness in response to the urgency of slowing down.” Clément Dazin

Already since an early age Clément Dazin has been fascinated by movement and body control. He first started with gymnastics and after that he turned toward circus and especially juggling. He continued learning movement and stage attitude by taking hip-hop dance and theatre classes and by practicing juggling and acrobatics in different places. In 2009 he joined the National Centre of Circus (CNAC) in 2009. There, he had the opportunity to meet some distinguished artists and got interested in mixing  contemporary dance, Hip Hop technics and juggling. Gradually he started working on own creations which he has been presenting successfully throughout Europe.

The guest-performance of  “Humanoptère” is supported by Institut français in Bulgaria and by National Culture Fund.