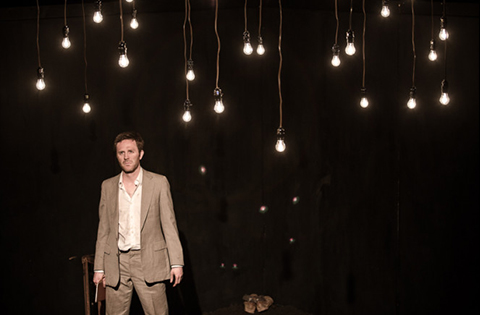 Performed in English with subtitles in Bulgarian.

`Kaddish`, culling its name from the Jewish prayer of mourning, is a stage adaptation of Imre Kertész’s novel, `Kaddish for an Unborn Child` (1989), a feverish monologue of a Holocaust survivor. The play is an exploration of ritual, loss, and an unrelenting inner conflict in which the beleaguered central character mourns the absence of the child he never fathered during his failed marriage, his mantra being a refusal to bring a child into a world where horrors like the Holocaust can occur. He weaves a brutally honest, deeply personal, stream of consciousness web of the unseen casualties of war, political corruption, Jewish identity, and the humor of living. “A philosophical, yet humorous text that forces us to reconsider our notions about Auschwitz… Jake Goodman combines incredible power, self-control, composure and inner fire in transmitting the inexplicable.” (Andrea Tompa, theatre critic) Created with the support of LABA (Laboratory for Jewish Culture) at the 14th Street Y in New York and the Center for International Theatre Development in Baltimore.