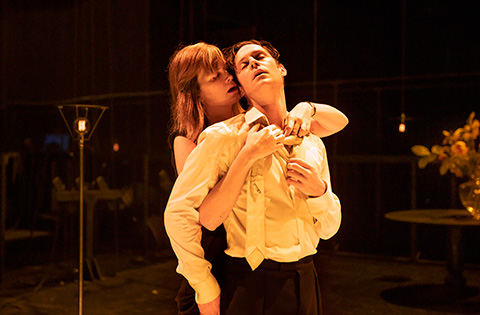 Celebrating Molière’s 400th anniversary in his house with a work that has never performed by the Troupe seems unimaginable, yet with “Le Tartuffe ou l’Hypocrite” Ivo van Hove has us discover the original version, which was banned after the first performance in 1664. He reveals the original version of the play before it was censored by King Louis XIV in 1664, the day after it premiered. The production features some of the best actors of Comédie Française.

In his quest for Christian perfection, the wealthy Orgon invites the hypocritically pious Tartuffe into his home. Assuming the posture of moral teacher to the entire family, Tartuffe courts Orgon’s property and attempts to seduce his wife, the beautiful Elmira. He thus brings the family to the brink of implosion.

Ivo van Hove is one of the most interesting directors in the contemporary theatre. Born in Belgium, his career started thriving in the Netherlands. He gained popularity for his vivid contemporary interpretations of classics and large-scale stage productions combining theatre and cinema. He stages all over the world, from New York to Paris to Buenos Aires, and has won many prestigious awards.

Presented with the support of the French Embassy /Institut français Bulgaria and National Culture Fund of Bulgaria.