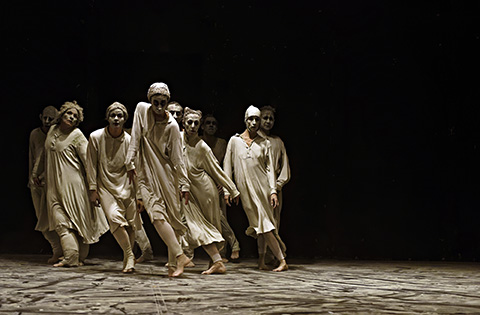 AN ABSOLUTE CLASSIC IN CONTEMPORARY DANCE!

“May B” is an iconic piece by the grand dame of contemporary dance in France Maguy Marin. Created in 1981, it established her international reputation and continues to be performed around the world, being presented more than 800 times so far.

Inspired by Samuel Beckett’s oeuvre the performance interprets his absurd world by the means of dance theatre and expressive imagery. The title itself refers to Beckett’s affinity for the word ”perhaps” and recalls his own puns. The dance’s power comes from its capacity to represent the mystery of our presence in the world.

“She is blessed with a sense of fantasy and of the absurd – and in Samuel Beckett’s plays, she has found a perfect focus for meditating upon life’s absurdities. Like Beckett, she works with archetypal characters – his, in fact – and using universals, makes the human condition look very specific.” Anna Kisselgoff, The New York Times, 1986

Born in Toulouse, Maguy Marin studied classical ballet at the Toulouse Dance Academy. She then joined the Strasbourg Dance Company and later Mudra, Maurice Béjart’s school in Brussels. In the course of several years she was a soloist in his famous company Ballet du XXе siècle. In the ‘70s she started working independently and became a part of the new French wave in dance. In 1984 Maguy Marin founded Maguy Marin Dance Company with which she has created more than 50 performances. She is distinguished with the American Dance Festival Award in 2003 and received a Golden Lion in Venice for her career in 2016.