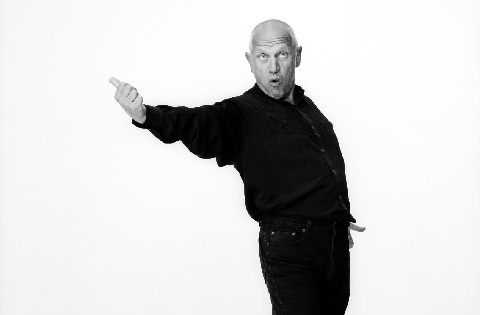 Steven Berkoff is the long-acknowledged master of the British physical theatre movement. After studying drama and mime in London and Paris, he entered a series of repertory companies and in 1968 formed the London Theatre Group. His plays and adaptations have been performed in many countries and in many languages. Among the many adaptations Berkoff has created for the stage, directed and toured, are Kafka’s “Metamorphosis” and “The Trial”, “Agamemnon” after Aeschylus”, and Poe’s “The Fall of the House of Usher”. Renowned throughout the world as actor, writer and director, Berkoff is known to many for the roles he has played in movies such as “A Clockwork Orange”, “Barry Lyndon”, “Beverly Hills Cop”, “Rambo” and others. He has published a variety of books on the theatre such as the production journals “I am Hamlet”, “Meditations on Metamorphosis” etc.

In “Shakespeare’s Villains”, the popular Olivier Award nominated one man show of Steven Berkoff’s East Productions, his mesmerising presence fills the stage this time with his exploration and analysis of Shakespeare’s most villainous characters: Iago, the Macbeths, Shylock, Richard III… Characters who are inherently evil, whose situation leads them to perform evil deeds, and such left at the mercy of an evil society. Incisive insights into the psyche give way to Shakespeare’s own words which explode into the auditorium from one of the UK’s most formidable and maverick talents.

“No other English actor today exudes such a sense of danger and unpredictability. He is a smiler with the knife under his cloak, the lull before the storm and the storm itself.”
The Evening Standard

The guest-performance is supported by British Council and Sofia Municipality.