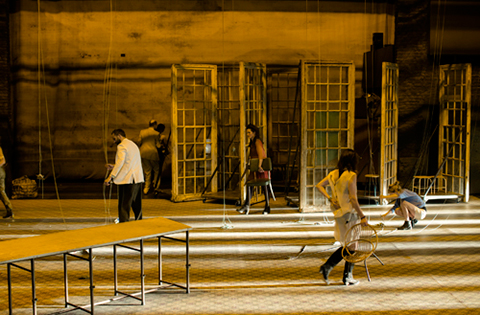 “The next play I write will definitely be funny, very funny, at least in intention.” (Chekhov to Olga Knipper, 7 March 1901)

For the last 117 years, The Cherry Orchard has drawn and fascinated artists and theatre lovers alike. The last play before his death, this piece by Chekhov is considered by many to be his most mysterious, and ambiguous. From the outset, the intrigue is resolved: the cherry orchard is to be sold off. What happens on stage, then, between the return to the estate by its owner, Lyubov Andreievna, and the ending?

Faced with the loss of the estate, the characters seem to hesitate between opportunism, resignation and nostalgia. The Cherry Orchard describes both the decline of an indolent aristocracy and the victory of unbridled capitalism. In order to increase the market value of the estate, it devours everything in its path right up to the cherry orchard. Despite a setting conducive to social critique and melancholy, Chekhov remained adamant that the play was a comedy. He even lost his temper with Stanislavski for taking it too much in the direction of a tragedy. Going beyond the question of the different registers, tg STAN make The Cherry Orchard a play for today’s audiences. In it, instrumental reason and logic poses a threat to the seemingly useless and to beauty, and language struggles to fill the vacuum, when it is not empty itself. In their customary way, the Belgian actors make no attempt to reconstitute the play’s historical setting, and provide us instead with a collective, much mulled over, vision, addressed to us in a very direct way each evening.

Theatre company STAN, an acronym for Stop Thinking About Names, is a collective formed by Jolente De Keersmaeker, Damien De Schrijver, Sara De Roo, and Frank Vercruyssen, who met in the late-1980s at the Antwerp Conservatorium. The company operates on the democratic principle that everyone participates in decisions on everything, from text selection, décor, and lighting to costumes and posters. STAN places the performer in the centre and strongly believes in the principle of the sovereign actor: s/he is both player and maker. STAN nurtures a firm belief in the ‘living’ power of theatre: the performance is not a reproduction of something that is learned, but is being created anew every night, along with the audience. A STAN performance is therefore not a finished product, but rather an invitation to a dialogue.

Project co-produced by NXTSTP, with the support of the European Union’s Culture Programme