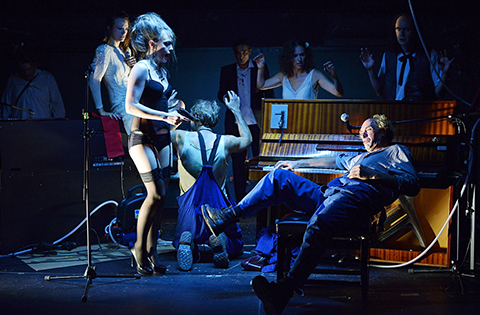 The Crazy Locomotive is one of the most powerful plays written by the icon of Polish artistic avant-garde Stanisław Witkiewicz – Witkacy. It has quite an absurd and multidimensional sujet. Two master criminals, Prince Tréfaldi and his associate Travaillac, who have been masquerading as a railroad engineer and his fireman, seize control on a locomotive. Their aim is both scary and awkward: they want to smash it into another train at high speed. Thus they believe they will bring about “God’s Judgement,” a cataclysm of a cosmic scale, and experience the Mystery of Existence. After millions of adventures, finally the tracks cannot take them out of this world into another dimension, but only along a predictable route to known human disaster and into the hands of the authorities. Written in 1923 The Crazy Locomotive hasn’t seized to challenge each artistic team that wants to stage it – how to show on the scene an action that is taking place on the top of a racing train? How to perform such an experimental and unusual text? The director Jernej Lorenci (known to the festival audience with his staging “Storm”, ITF “Varna Summer” 2013) applies an original theatrical approach by representing the racing train in the form of two pianos thus creating a remarkable and extravagant theatre-cabaret. Grand Prix of the 48th Maribor Theatre Festival „Borstnikovo srecanje”, 2013 for best performance