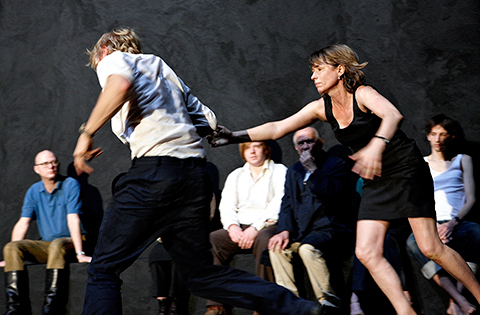 Teacher Semyon loves Masha, but Masha loves Konstantin, who in turn loves Nina. And she loves Trigorin, the writer who loves only himself. Chekhov’s bittersweet comedy “The Seagull” is about love enduring misfortune and unhappiness, about escaping provincial life, and about the production of art itself. The play reflects Chekhov’s assertion about himself and his fellow writers that: “We describe life as it is and stop dead right there. We wouldn’t lift a hoof if you lit into us with a whip. We have neither immediate nor remote goals, and there is an emptiness in our souls. We have no politics, we don’t believe in revolution, there is no God, we’re not afraid of ghosts, and I personally am not even afraid of death or blindness. If you want nothing, hope for nothing, and fear nothing, you cannot be an artist.” In “The Seagull”, Chekhov successfully reflects the emotional misery people suffer in their everyday lives and the materially-saturated society which leaves them spiritually running on empty. And the playwright does this in a way that’s both humorous and ridiculous.

“The Seagull” is one of the last performances of the outstanding German director Jürgen Gosch which premiered in 2009. All the reviews highlight the first-class acting of some of the leading actors from Deutsches Theater, among them the famous stage and film actress Corinna Harfouch and the young star Alexander Khuon as well as director’s ability to get to the essence of the experience and directly convey it to the stage. The performance is also a vivid example of his lasting partnership with set designer Johannes Schütz.

In 2009, the production was invited to Berlin’s Theatertreffen – a festival honouring the year’s best German-language theatre productions. The Seagull was also voted Production of the Year 2009 by the critics’ poll in trade journal “Theater Heute”.

Jürgen Gosch (1943-2009) is one of the most distinguished German theatre directors at the end of the 20th and the beginning of the 21st century. He won the German Theatre Association’s Faust award. Many of Gosch’s productions have been invited to Berlin’s Theatertreffen – an annual theatre festival featuring the year’s top German-language productions and in 2009 he was made an honorary member of the Deutsches Theater. At the 2009 Theatertreffen festival, Gosch and his longtime set- and costume designer Johannes Schütz were honoured with the Berlin Theatre Award for their “outstanding contribution to German-language theatre”. Jürgen Gosch studied at the Ernst Busch School for Performing Arts in East Berlin and by the end of the 1960’s he started also directing. In 1978 he put together at Berliner Volksbühne a production of Georg Büchner’s “Leonce and Lena” that was critical of the Communist system and was subsequently cancelled. That same year Gosch left East Germany and he started staging at some of the biggest theatre houses first in West Germany and then in the reunified country such as Thalia Theater in Hamburg, Düsseldorfer Schauspielhaus, Schaubühne Berlin, Deutsches Theater Berlin a.o.