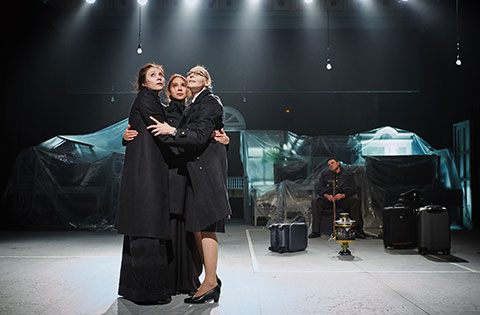 32-year old director Timofey Kulyabin has been called the “prodigy” of new Russian theatre. Now he is the artistic director of the theatre in Novosibirsk where he stages Chekhov’s classic “The Three Sisters” in a way that draws spectators into an entirely novel experience and manner of understanding.

A black comedy, a psychological drama, a thriller – the four acts of the play turn into a true parade of genres. To leave provincial wilderness, to serve science, to work! Everyone in the Prozorov family, whose original setting has been moved to the present day, is in pursuit of happiness. But this common impulse engenders a tragedy that the characters in this performance are unable to comprehend until the very end – and it is not only because they cannot hear each other. This is precisely what the director’s main move is all about: all actors perform their roles in a sign language all the time. The performance is constructed as a choreographic and musical score with gestures and sound, thus adding extraordinary intensity and depth to its reception. The sensational and beautiful performance has already been presented at the big European festivals in Vienna, Paris, Sibiu, Athens a.o.

The performance is in Russian sign language with English and Bulgarian subtitles.