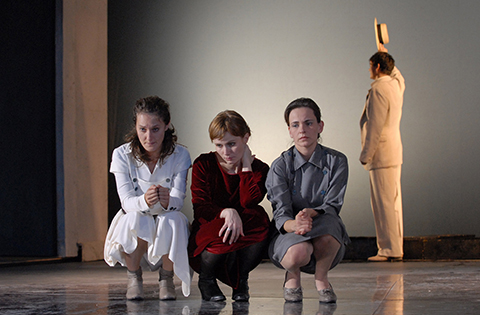 Masha, Olga and Irina, three highly cultured and exquisite sisters who grew up in Moscow, have been living with their brother, Andrei, in the countryside for eleven years. After their father’s death, an obsession to return to Moscow becomes for the daughters equal to the promise of a new life. The three sisters’ greatest desire is to go to Moscow, but because there is nothing to stop them, they are not going.

“Three Sisters is important for me as a play about redemption. In fact, it is the sacred level of the drama that interests me. The three sisters are actually three projections of the same woman: the child, the woman, and the mother who have to stay together in order to survive. The Father’s ghost floats around them; they cannot escape from him, nor do they want to. The Son also appears as the sisters, at the beginning of the play, experience the arrival of Vershinin in an almost messianic way. In him they see the saviour, the embodiment of Moscow. Finally, the Holy Spirit is also present, identifiable in the consolation arising from the ‘solemnity of weeping,’ the suffering which the characters have to embrace, each in their different ways. I am also attracted by the musicality of Three Sisters which connects it to the absurd plays which I like so much. This musicality, like any other symphonically structured work, demands a high precision and an accuracy of tone, colour, atmosphere, shading and an intense spiritual identification.” Gábor Tompa

Gabor Tompa is an internationally renowned Romanian-Hungarian theater and film director, poet, essayist and teacher. He received his training at the Theatre and Film Academy in Bucharest, Romania and began working as a professional director in 1981. Since then, he has directed more than 100 productions worldwide and has received widespread recognition for his physically adventurous and conceptually audacious productions of classic plays. Since 1990 he has been the general and artistic director of the Hungarian Theatre of Cluj which in 2008 became a member of the Union of the Theatres of Europe (UTE). He is president of the Union of the Theatres of Europe since 2018. He has been a guest teacher at universities in Europe, South Korea and USA where between 2007-2015 he has been Head of Directing at the Theatre and Dance Department of the University of California, San Diego. Professor Tompa has received many national and international awards, including UNITER Award for Excellence for his artistic achievements (2002).

In Hungarian with Bulgarian and English subtitles.