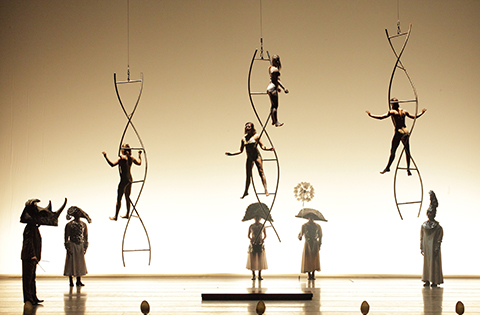 The documentary follows the creation of the show La Verità written and directed by Daniele Finzi Pasca and produced by Compagnia Finzi Pasca – a company that has become one of the landmarks of contemporary circus. La Verità was premiered 2013 in Montreal. In it 11 multi-talented artists move and live-sing in a succession of images that lead us through surrealism, a love story, and a reflection about the truth, giving birth to an acrobatic poem. In the play, there is an original 15 m x 9 m backdrop of the painting “Tristan Fou” by Salvador Dalí. The film crew attended all the rehearsals, spoke with the artists, the technicians and the complete creative team. They saw the backdrop being displayed for the first time. The fusion between the theatre and the circus, between acrobatics and clowning. They asked themselves about the world of dreams and got to a documentary about the different ways of being awake. About wakefulness.

“The language of acrobatics, of physical theatre may easily conquer a territory where it is neither night nor day, where light doesn’t touch reality but designs it, invents it or reinvents it. The language of the acrobats titillates our unconscious, making us see inner landscapes that appear truer than reality. Dali’s landscapes are set during night or day? The answer: neither, Dali’s images belong to another dimension, the dimension of dreams.” Daniele Finzi Pasca

Compagnia Finzi Pasca was founded by Antonio Vergamini, Daniele Finzi Pasca, Hugo Gargiulo, Julie Hamelin Finzi (†) and Maria Bonzanigo in 2011, continuing the work of the Teatro Sunil and of Inlevitas. Over the course of 37 years, they have developed a unique aesthetic and a very personal style of creativity and production, together with a philosophy of training for the actor, acrobat, musician, dancer and technician – a way of inhabiting the space. Theatre, dance, acrobatics, circus, opera and documentary: all come together in the work of the Compagnia Finzi Pasca.

Based in Lugano (Switzerland), it has created and produced more than 35 shows. Its creators staged 3 Olympic Ceremonies (Turin 2006 and Sochi 2014, both Olympic and Paralympic Games), 2 shows for the Cirque du Soleil: Luzia in 2016 and Corteo in 2005 (for the latter, 8.4 million spectators in a 10-year world tour) and 6 operas. It has produced also big world events in different cities across the globe.

With English and Bulgarian subtitles.