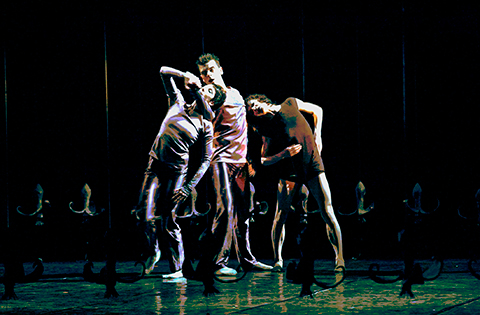 Kinesthetic Project stands for a group of young professionals who already have several successful performances. These are the choreographers Violeta Vitanova and Stanislav Genadiev, the artist Miroslav Yordanov, the set designer Ognyana Serafimova-Peneva and the cultural studies graduate Diana Papazova.
Violeta Vitanova and Stanislav Genadiev made their breakthrough in 2006 with the spectacular dance piece “Imago”, which won them the “Ikar” Award of the Union of Bulgarian Actors for debut. Both of them graduated Classical Ballet at the National Dance School. Then followed numerous participations in international productions in Switzerland, Italy etc. and in festivals. They do also choreographies for theatre performances and for State Ballet Arabesque productions.
The dance miniature piece “25.03”, inspired by Nikos Kazanzakis “Snake and Lily”, was awarded at the International Dance Competition “Margarita Arnaudova” with the award of the international jury, for original idea and original dance language. The solo “Ductus” tells the story of an equestrian, obsessed with his horse. It examines the notion of the human body in the process of disintegration to its components and particular functions, in search of new associations, creating new havens of desire.
“25.03”
I am calm, calm – shroud has spread through my soul, invisible hand
pushed me and harsh, unfamiliar voice talks and commands inside me…
…to run away and to hide deep within the woods, to lie on the ground
and to let the tears pour, pour for you, who were destined to know
me…”
From “Snake and lily”, Nikos Kazantzakis
„Ductus”
“Although being mechanical in their nature the convergences of the two restless bodies are well desired – as a result they form together a new organism, an odd physical complex – no longer the body of a man, nor the body of a horse.”
Miroslav Yordanov