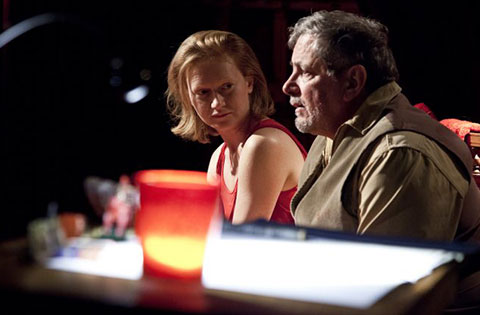 “This work is my candid attempt to be candid,” says the great Swedish stage and film director Ingmar Bergman. This year the world marks the 100th anniversary of his birth. The all-actor team of the performance “After the Rehearsal” pays homage to him with the play considered to be his “confession of love for the stage.” It involves the spectators into the situation of a “theatre within the theatre” where actors play actors and their impersonations, passions and illusions wander between real life and life on stage. Valentin Ganev together with actors Gergana Pletnyova, Stefka Yanorova and Veselin Rankov introduce us to the world behind the curtain and tell the story of a director and two actresses. For actor, rehearsal is life. And what happens afterwards? Where is the delicate boundary between the role and real life?

Bergman first wrote “After the Rehearsal” as a script for a TV film he shot in 1984. It earned very good reviews and was presented at the Cannes Film Festival. In it Bergman again enters deep into the complex psychology of his characters and one by one removes the masks everyone puts on themselves in the theatre of life.