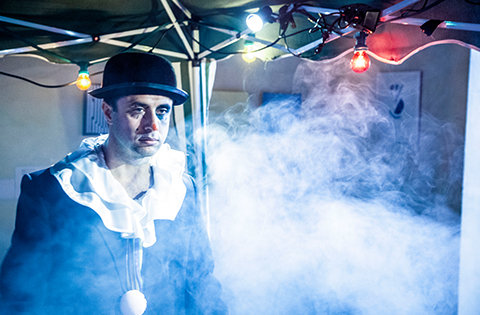 “Allez, hop!” is the first phrase in circus jargon: it means the instant of total concentration and readiness that precedes the flight, jump, magic. “Allez, hop!” marks the end of preparation and the start of demonstration: the entire circus life cycle is enclosed between these two phases. Tens of human fates have been spinning in it, devoted to the long, strenuous preparation and transient, risky demonstration. “Allez, hop! – Highwire Walking” is the new performance of Vox Populi Studio for Documentary Theatre, born out of actors’ meetings and conversations with circus performers of Orient company during their tour. With this performance the original and topical group of Vox Populi makes yet another step forward in the genre of the so-called “verbatim” theatre. “Verbatim” (from Latin word “verbatim” meaning “word for word”) performances are based on documentary interviews and the on-stage reproduction of their expression and form. “Allez, hop!” takes the audience through the everyday life, stories and stage tricks of circus performers recreated by the actors as told, heard and seen.
The project is carried out with the financial support of Sofia Municipality’s Culture Programme.
Union of Bulgarian Actors’ 2015 IKAR Award nomination for technical accomplishment