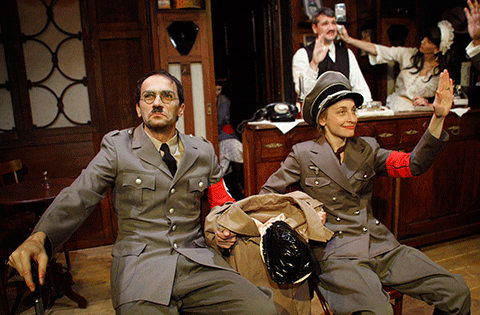 “Allo, allo” is a stage version by the director Robert Yanakiev based on the play of the same name by David Kroft and Jeremy Lloyd, written before the cult comic TV series becomes a world hit. The production preserves the atmosphere of the Second World War and the typical British humour of the absurd situations and zany characters is delivered with a touch of French accent. Set during World War II, ‘Allo ‘Allo! tells the story of Renй Artois, a French café owner. Germans have occupied the town and stolen all of its valuable artefacts. All of this can be found in the theatre production but the favourite characters, performed by well known Bulgarian actors, makes the story very close. The special guest star Josif Sarchadjiev turns the performance into a genuine theatre experience with a movie flavor. IKAR 2011 Nomination for Debut – Petar Ladzhev.