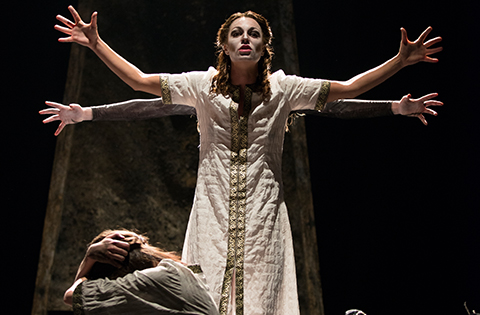 French playwright Jean Anouilh, one of the most celebrated personalities of 20th-century French theatre and literature, wrote “Antigone” in 1941/42 by adapting the plot of Sophocles’ Ancient Greek tragedy of the same name to his day, the period of French Resistance during the Nazi occupation. Antigone, Oedipus’ daughter, is a young woman who consciously chooses the path of resistance in the name of ethical values she defends. She sets against the orders of her uncle, King Creon, and buries her slain brother Polynices, who was branded as traitor, an act for which she is severely punished and sentenced to death. Antigone is arrested and finally takes her own life in the cell. Director Ivan Dobchev creates a performance that sounds like an ancient tragedy and a contemporary debate over the actual reasons of the one who protests, “the one who says “NO” to the self-evident “YES” and defends it with one’s life.” (Ivan Dobchev). Memorable performances of the young actresses Dariya Simeonova as Choir and Katalin Stareyshinska as Antigone.