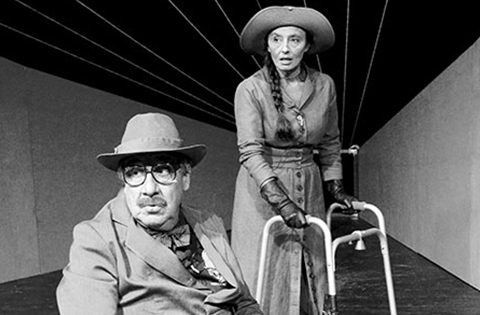 AS YOU DESIRE ME

based on the play “Come tu mi vuoi” by Luigi Pirandello

This is the first staging in Bulgaria of the play “Come tu mi vuoi” by the Nobel Prize winner Luigi Pirandello, written between the First and the Second World Wars. In it the Italian author creates quite attractive female character, the Unknown Woman. Nothing about her is known for sure, her past is a mystery, her present is made up of different roles depending on whose hands she falls into. She lives under the name of Elma at the house of the writer Salter. One evening, a stranger unexpectedly comes by. He claims he is a childhood friend of hers and offers to bring her back to her former life – with her husband, family and inheritance. Thus, both an opportunity to assume a new identity and the challenge to create herself again in another home are opened for the Unknown. Director Stefan (Tedi) Moskov, a master of improvisational theater and true to Pirandello’s spirit, flings with the very idea of identity. Video images are laid over the action on stage causing a constant change of points of view and perspective. The result is a tragic farce, aesthetically built and created with lots of artistry and precise acting.