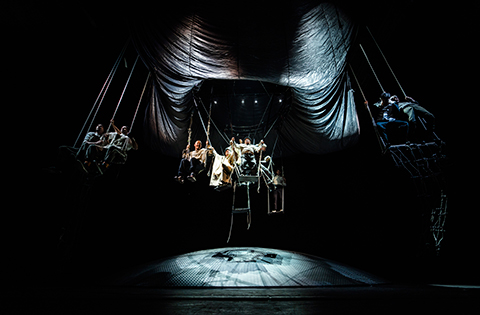 AN ATTEMPT AT FLYING

Everything in this comical and dramatic story begins with a wandering balloon that broke free from the World War II fronts. It suddenly appears above the rural Avramovi hamlets. The event leads to several groups being formed to go after the balloon. The chasers are more than vivid: some typical characters who look like outlined mindsets of local heroes coming out of the imagination of Yordan Radichkov whose 90th anniversary is celebrated this year. His magic world combines folklore motives and parables with contemporary topics. “An Attempt at Flying” sounds like a local and a universal story of how and why we create myths out of real-life events which add some other meaning to the routine life disintegrating into the mundane.

Director Stoyan Radev discovers a form of existence, realistic and metaphorical at the same time, of Radichkov’s characters between the daily grind and the imaginary, between the boundaries of reality and the need of a dream that surmounts it. The bizarre characters are impersonated by some emblematic actors from the National Theatre who lend them characteristic peculiarity.