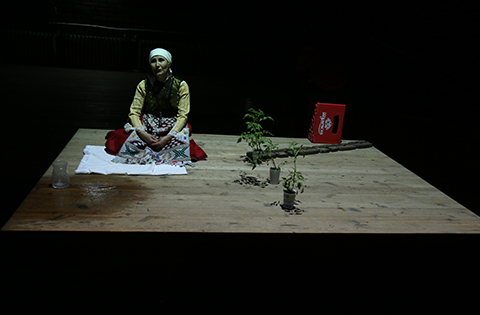 “Bulgaria Starts Here” is based on a documentary text, written by the director and based on interviews with citizens of Shumen, speaking on topics that are important for the town and its people. They are impersonated on stage by professional actors who are listening to the real-life people’s voices in earphones and reproduce their words, articulation and behaviour in a stage setting. The result is a performance offering a penetrating insight into the national past, into the notion of family identity, into contemporary patriotism and co-existence of different ethnic groups.

Neda Sokolovska is a stage director and founder of “Vox Populi”, a studio for documentary theatre. Since 2012, she has consistently launched and developed the “verbatim” (from Latin –  “word for word”) technique in Bulgarian theatre in documentary performances and has gained recognition as one of the most successful and innovative directors on Bulgarian scene. She has directed the performances “Yatse Forkash” (2013 IKAR award for best dramatic text), “Mothers” (2013 ASKEER award nomination for best performance), “Allez, hop! – Highwire Walking” (2014 IKAR award nomination for best technical realization), “Findings of the Inspection” as well as the landmark series “Invisible” that explores life of marginal social groups that are “invisible” for the public. She has been awarded the Ministry of Culture prize for achievements in Bulgarian culture. After a number of independent projects “Bulgaria Starts Here” is her first performance on the stage of a state theatre outside Sofia.