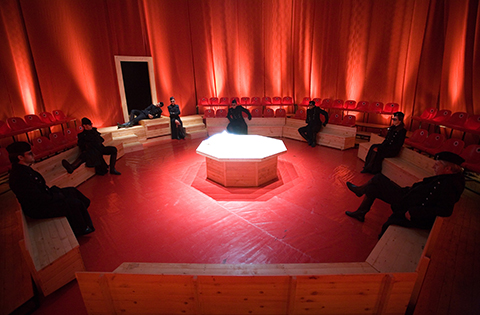 Yavor Gardev is a representative of the new wave theatre directors that define the contemporary Bulgarian theatre. He stages theatre performances, but works on interdisciplinary projects – video and art performances, radio plays. In 2008 was released his film debut “Dzift” that has been receiving numerous national and international awards. In his work he often problematizes the mechanisms of political power, its subjects and the ways they effect the society. It is featured by radical and unconventional approaches where the use of theatrical space and composition of the relations between stage and audience are of crucial importance. Here Gardev works in a tight collaboration with the set designer Nikola Toromanov. This is valid also for his recent staging on Albert Camus’ play “Calligula” co-produced by Drama theatre “Stoyan Bachvarov” – Varna and the theatre La Rose Des Vents – Scеne Nationale Lille Mеtropole – Villeneuve D’Ascq.

Albert Camus’ provocative play is based on the turbulent years of the reign of the legendary tyrant Caligula in on Ancient Rome. Written in 1938, nowadays the play has the status of a modern classic and is considered one of the landmarks of existentialism in theatre. For the director Javor Gardev, the story of the rule of the eccentric and cruel emperor is in fact a story of a “über-suicide”, in which human life itself is turned into a work of art. The production is an impressive fusion of intense dramatism and physical theatre. The stage is transformed into an ancient forum for a desperate and at the same time ironic discussion on political and existential matters. of matters political and existential.
“To consciously attempt on the system when you are the head of it. To assert yourself through self-destruction. To prove oneself through contradiction. To make sense through nonsense. That’s what I call existentional punk!”