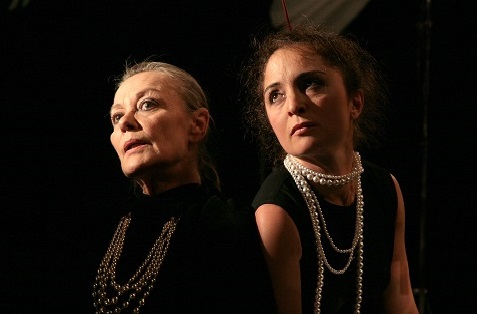 “Coco” tells about the complicated and controversial life of the 20th century fashion revolutionary Coco Chanel. The structure of the play follows an imaginary dialogue between the Old and the Young Coco who comment on her biography thus intersecting two points of view of one and the same person, but distanced in time. The director Vazkressia Viharova removes all complement characters lead by her interest not to follow chronologically and reproduce Chanel’s biography, but rather to test various strategies for the scenic reconstruction of a life.

Vazkressia Viharova has a strong profile in the Bulgarian theatre of the late 80’s and 90’s, founder and lecturer of the Theatre Department at New Bulgarian University. In her work she investigates the broad range of psychological and physical theatre. In “Coco” Viharova combines their expressive means by entrusting the parts of the Old and Young Coco to actresses belonging to different generations and acting styles. Tsvetana Maneva’s mastered psychological gestures and Asia Ivanova’s physical expressiveness fuse in an interesting and effective symbiosis.

Sanya Domazet is among the successful contemporary Serbain authors of novels, theatre plays, radio plays and scripts. She writes also theatre and literature criticism in the daily newspaper Danas.

Is it possible for a text about the life of a woman to reach beyond the “yellow” gossips? Perhaps! In my pre-work and during the whole rehearsals process I was constantly Googling, I did not rely so much on the play as on Google… And that is how I defined the genre of the performance I wanted to make: internet aesthetics with a hint of luxury (arch. Zarko Uzunov’s geometry, Vesselin Dimitrov’s details, Asen Avramov’s soundscape) and the live experience of the actors with Tsvetana Maneva’s “sensitive voice” and Asya Ivanova’s “sensual body”. For more: see Google, Coco Chanel.
Vazkressia Viharova