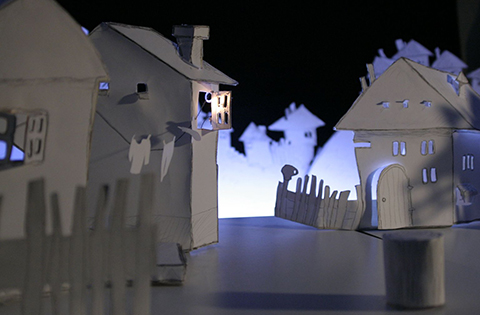 Cold is a sequence of wordless scenes based on the phantasmal world of Yordan Radichkov’s works. The set and the props of the performance are created entirely from paper clippings. They become alive in stories about friendship, love, dreams and real worlds, united by the theme of loneliness. The authors of the staging describe it in this way: Snowy impenetrable mountains. Silent woods. Somewhere in their embrace hides a small village with its crooked houses, ordinary people, winter mornings…  Bit by bit a small white world is being created to the accompaniment of folklore motifs in original music by Theodossiy Spasov, Rumen Toskov, Stoyan Yankulov and Elitsa Todorova.

The author of the performance Mila Kolarova graduates in Acting for Puppet Theatre. As a freelance actress she works with different theatres, but her stronger artistic connections are with the productions of the association of young theatre makers Nobodies. Nobodies is founded in 2002 by freelancers – directors for puppet theatre and cinema, set designers and actors. Their activity is oriented towards creating mobile club performances and theatre installations. They make performances in which the means of puppet and visual theatre are innovatively combined and present them in alternative venues. Boom – Boom, 1, 67, 6 000 000 (dir. Magdalena Miteva) have been successfully presented at national and international puppet theatre festivals and all three of them were awarded by the jury of the STOEP Festival for best performance in the Netherlands. Cold is Mila Kolarova’s first performance as author and it won the Union of Bulgarian Actors Award Ikar 2008 for Puppet Art.