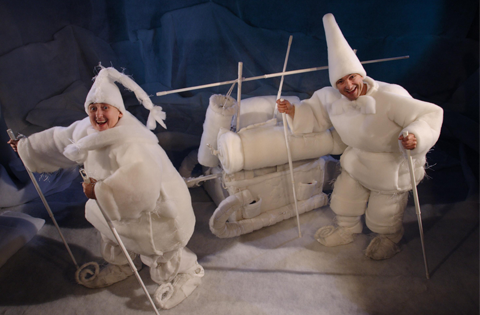 The actors Nina Dimitrova and Vassil Vassilev-Zuek founded the independent theatre formation “Credo” in 1992. Their first show “The Overcout” after N. V Gogol gained an extraordinary success. In it the theatre tandem was noted by its expressive and original improvisational style. Already 13 seasons “The Overcoat” has been on stage in Theatre 199 and over the world. It has been performed at over 150 international theatre festivals, winning 11 internationa awards and being performed in 9 languages. At the Edinburgh festival’ 97 it was listed by the critics in their “Top 20” best events.
“Daddy’s always right” after Andresen’s story of the same name, is the new production of “Credo”. Created at invitation and with the support of foundation “Hans Christian Andersen 2005” , its international premiere was in Denmark in the frame of the worldwide celebration of the 200th anniversary of the great writer’s birth. The show has been already invited to participate in international theatre festivals in Japan, South Korea and Poland.
“Daddy’s always right” is a fairy-tale for adults, performed in a fantastic theatricality,

A stunning rhythm of performing that emanates warmth and coziness. And what a charming piece of acting!
“Stiftstidende”, Denmark