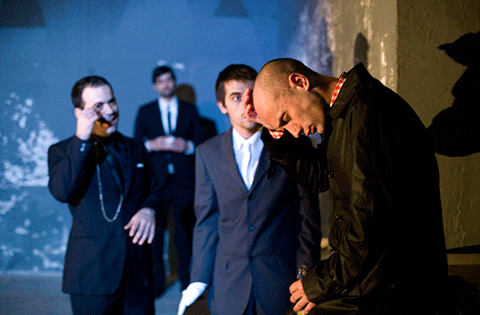 DAGMAR THE DEAD OR THE LITTLE MATCH GIRL

>“Dagmar The Dead or The Little Match Girl” is the first, single handedly written play by the author ghostdog, who became popular with his text for the performance of Based on Actual Events Association “Butterflies are jet fighters actually” (Ikar 2009 award for Best Debut to the actress Irina Docheva). His style is distinguishable with its strong self-irony, free associations, quick-witted references to cultural archives and modern phenomena and inspiration from the street life of Sofia. Ida Daniel’s performance raises interesting questions: How to create a veritable invention? Who needs truth? Why is fiction made? Where is the border between reality and fiction? ASKEER 2010 Nomination for best newcomer – Ida Daniel IKAR Nomination 2011 for music – Ambient Anarchist.