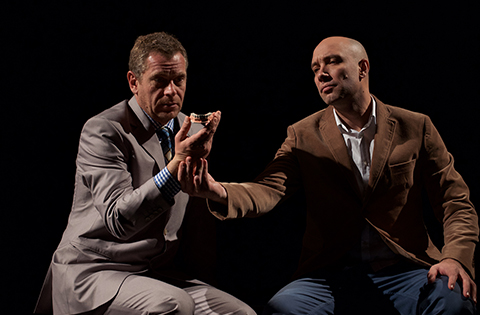 The play by the world-famous Spanish playwright Jordi Galceran earned him an award as soon as it was published 20 years ago. It is among his most often staged texts all over the world. The main character, Hipólito Jarama works what he wants, has a wife he loves, and is expecting a child to be born any moment. Suddenly his whole life turns upside down. After two weeks in a coma, he starts having nightmares, which start to materialize, one by one. Hipólito’s world is losing its outlines and no one can understand where dreams end and where truth begins, and what actually determines the events, the twists and turns in our lives.

“Dakota” is actor Vladimir Penev’s second attempt at directing for the stage. In his words “…it is a real challenge and a great opportunity for a director to interpret such a text on the stage and to do so with that cast of actors. Zahari Baharov, Yulian Vergov and Vladimir Karamazov are one of the most temperamental combinations in Bulgarian theatre and when we add the exceptional Aleksandra Vasileva I think what we’ve done is quite an exciting reading of Jordi Galceran”s “Dakota”. With its masterful attention to the detail and to each individual characteristic, while building these unusual characters; with its taste for comedy and a sense of on-stage communication with the audience ,“Dakota” has become one of the season’s successful shows.