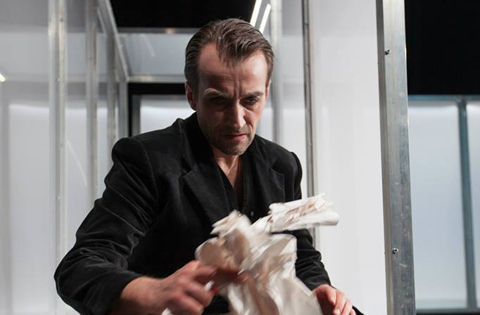 Author: adapted for stage by Christopher Hampton from the novel of the same name by Choderlos de Laclos, translated by Maiya Pramatarova

After “Cancun” director Stilian Petrov has realized his second successful performance on the stage of the Varna theatre. As a basis he has used Christopher Hampton’s stage adaptation of the celebrated epistolary novel by Choderlos de Laclos, whose popular screen version directed by Stephen Frears earned 6 Academy Awards. The novel tells the story of marquise de Merteuil and vicomte de Valmont, two former lovers who use seduction as a weapon and a game of dominance. Stilian Petrov’s interpretation is focused on the bond of belligerent drive and eroticism in human nature. “Dangerous Liaisons” is thus presented as a game-war, war-game where one acts urgently employing attack, assault, punishment, torture, staunch strategy, confusing the enemy, hope and fear for the enemy, merciless revenge, power, force, death. The performance brings together some of Varna’s most renowned actors; its stylish set and costumes in the chess-like black and white were designed by Venelin Shurelov and Elitsa Georgieva (2014 IKAR award for  best set and costume design (“Cancun”).