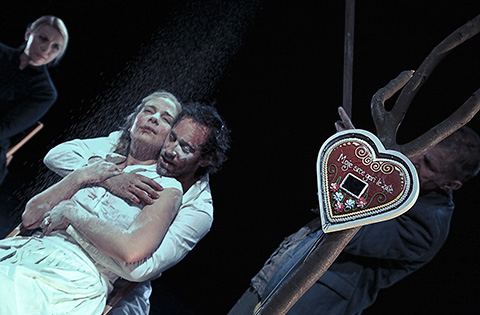 DEAD MAN COMES FOR HIS SWEETHEART

Micka loved Anzel and Anzel loved Micka. But their love did not have a happy future. It died together with Anzel and Micka was left with a life she doesn’t want, a life that others want to impose on her…

The play “Dead Man Comes for His Sweetheart” has roots in the eponymous folk song. Svetlana Makarovič, a distinguished Slovenian writer of prose and poetry, has approached the topic in a striking and different manner and looked at it from different points of view. She builds a world in which she recreates the atmosphere of folk beliefs and the power of the community to set norms of living.

Jernej Lorenci’s performance combines songs, poetic tales and symbolic imagery, bringing theatre closer to the tradition of storytelling and the idea of the healing power of music. The production has been presented at leading festivals in South-eastern Europe and won a number of awards, including the Best Performance Award of the Slovenian Theatre Critics Association. Jernej Lorenci has gained wide acclaim in Bulgaria after in Varna and in Sofia were presented his remarkable productions based on “The Tempest” by A. Ostrovsky, “The Crazy Locomotive” by St. Witkiewicz, and “The Iliad” by Homer.

With English and Bulgarian surtitles.