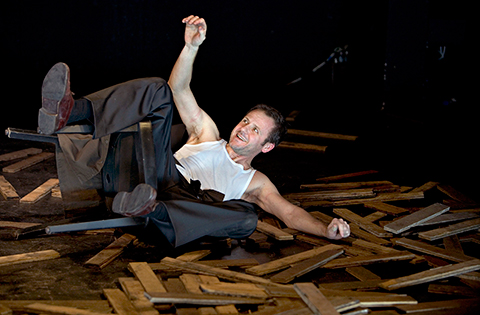 Hanna Rudoph studied acting first at Schauspiel-Studio Frese in Hamburg and later under Liz Kemp in New York. After working on various theatre and television projects, Rudolph began a degree in theatre directing at the University of Hamburg. In 2005 she was awarded the Doctores Völschau Prize for Young Stage Directors. Since her graduating she has staged at Schauspiel Kiel, Deutsches Theater’s Box theatre, Staatstheater Mainz a.o. Hanna Rudolph directed Nikolai Gogol’s “Diary of a Madman” at the DT Box for the 2007/2008 season.
The staging is a monoperformance of the extravagant actor of Bulgarian origin Samuel Finzi. He studied acting at the National Academy of Theatre & Film Arts in Sofia. In the early 1990s he began performing mostly in Germany. Here he became known largely through his work with Dimiter Gotscheff. He has worked also with Robert Willeson, Michale Thallheimer, Ivan Pantaleev and others. Finzi’s film and television credits in Bulgarian and German productions are also extensive. In the 2006/2007 season Samuel Finzi joined the Deutsches Theater Ensemble.
“Diary of a Madman” is his first monoperformance. With a remarkable comedian talent Finzi performs in a frenzied staccato of syllables, words, sounds and gesterues the role of the grotesque and tragical Gogol’s character who gradually sinks in an absurd imaginary world.
“This is a solo performance by an insatiable theatrical animal on an almost empty stage. Finzi delivers eccentric interpretations of all stages of loss of consciousness – from complete obstinacy, through hurt and fear resulting from a malevolent, confusing, yet unalterably hierarchical world, all the way through to the triumph of megalomania.”
Berliner Zeitung