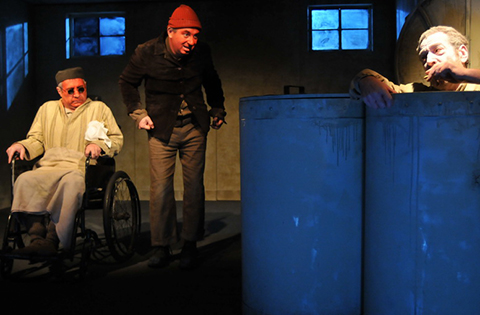 Lilia Abadjieva’s early performances of the late 90’s revealed her as a director with her own and recognizable style. She turned the postmodern deconstruction of classical and modern plays (“Hamlet”, “Othelo”, “The Inspector”, “The Seagull”), pop-aesthetics and emotionally powered iconography and movement into her label. With the last years’ staging of “Waiting for Godot” by Beckett (selection ITF “Varna Summer” 2008) she shows a tendency to return to text and simplifying the scenic form and actor’s presence.
In the charachteristic for the theatre of absurd play “Endgame” Lilia Abadzhieva interprets the game as a means to postpone the inevitable end. The hopeless existential situation of the characters turns them into grotesque masks. Hamm, who is blind and chained to a wheelchair and his servant Clov who cannot stand still, live in a bleak underground room. Hamm’s parents live in dustbins. Time feels as if caught in the cadence of a painful and ironic game, where the characters’ fears and hopes are at stake. Lilia Abadjieva thoroughly recreates the text into a display of powerful acting in a performance about bidding farewell to illusions.
“In “Endgame” Becket deals with the fear of the human being that at the end of life cannot find answers to basic questions. The man in front of the wall the own hopelessness, desperately tries to make up a new utopia that can give him a reason to go on.”