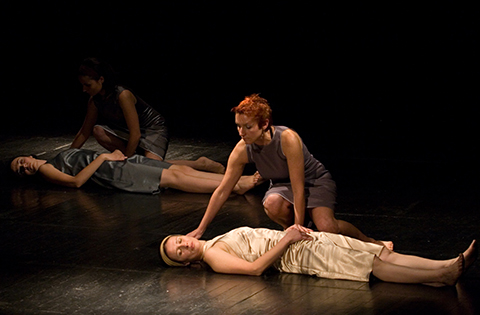 Elena Panayotova graduated Theatre Directing at the Theatre Department at New Bulgarian University. Her professional interest is in the field of theatre anthropology and physical theatre. She teaches at NBU and University of the Arts – Utrecht, The Netherlands. She has done various theatre specializations with scholorships. Her performances have been shown at many festivals and “The House of Bernarda Alba” has won the award of the INFANT Festival in Novi Sad for “most original exploration of theatre language segments.” In 2008 she founded Performance Lab Sofia aimed at realizing theatre performances on the border of theatre and dance.
„Falling Silent” is a physical theatre performance inspired by Ingmar Bergman’s enigmatic masterpiece “Persona”. A maverick for its time, the film follows the complicated psychological processes in which a woman decides to stop speaking and thus refuses to accept all conventional social roles imposed on her – as an actress, mother or wife… The performance is constructed as a sequence of variations on the subjects of doubling, obsession, of presence of the body in silence. It investigates silence as a conscious choice and pushes the borders of human contact beyond the limits of language – in the body, movement and voice.

“Falling Silent” challenges the perceptions of the spectator playing with memory and anticipation to initiate an ecstatic experience of the present moment. “Falling Silent” invites to contemplation and aims to reveal those secrets of human life that only theatre can express”.
Elena Panayotova
The performance is realized with the support of the Fund for Strategic Projects at the New Bulgarian Theatre Board and its circulation is realized with the support of the Ministry of Culture, Etud Foundation and “Equity Watch Research Services” Ltd.