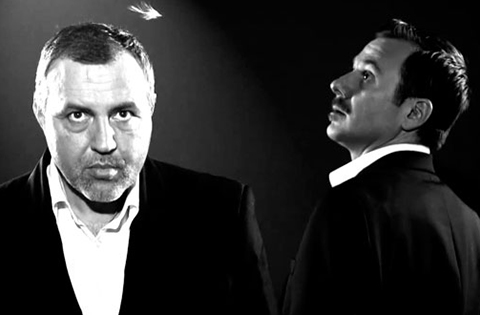 In the plays written by Yana Borisova, one of the most successful contemporary Bulgarian playwrights, the act of sharing is the driving force to every event, and sometimes it is even the most important thing. Same is the case with “For You.” The text was written in the form of shared thoughts between friends – Yana Borisova wrote the roles especially for Hristo Mutafchiev and Stanimir Gamov by gathering pieces of their lives and arranging them into a jigsaw puzzle of actual experiences, uttered words and confided secrets. Frightened by an accident, both fallen in love with the same girl and having lost the meaning of life, the two brothers Emil and Viktor rediscover one another passing through emotional swamps and oceans. “Terribly funny, a bit sad and fearful, but deeply moving,” that’s how the playwright Yana Borisova describes her new play “For You.”
Union of Bulgarian Actors’ 2015 IKAR Award nomination for best dramatic text (Yana Borisova)
2015 Askeer Award nomination for contemporary Bulgarian playwriting