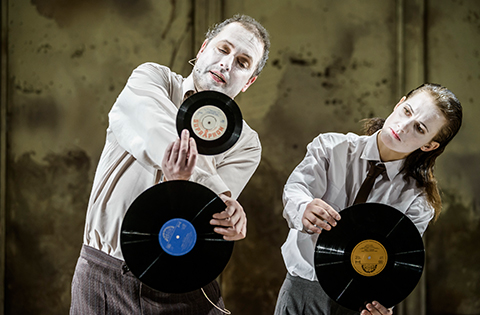 “Golden Sixties” by the young Czech theatre maker Jan Mikulášek is based on the diary notes of the film director and screen writer Pavel Juráček. He was a key figure of the New Wave in Czech cinema of the `60s and together with Václav Havel and other intellectuals-dissidents he put his signature under Charta 77 – an informal civic initiative in Czechoslovakia from 1977 to 1992, named after the document Charter 77 from January 1977. Its aim was to strive for respect for democracy and human and civil rights. The diary notes capture the rise and fall of a talented artist in the conflict with the social and culture circumstances as well as with his own bohemian personality. The diary offers not only an extraordinary insight into Juráček’s character, into his perception of the world and people surrounding him, but also the atmosphere of the ‘golden age` of Czech and European cinema. Jan Mikulášek creates  captivating political theatre piece that impressively fuses elements both from the esthetics of theatre and cinema.

The presentation in Bulgaria is supported by the Czech Centre – Sofia.