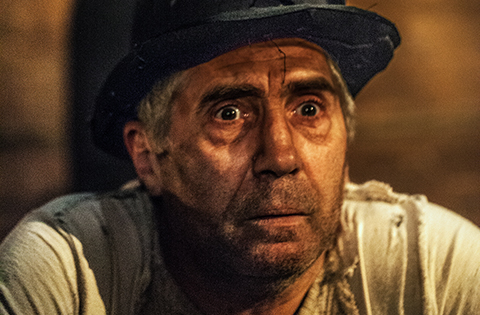 Based on the novel “Nemili-Nedragi” by Ivan Vazov

For 10 years now “Hashove” has always been played to full houses, which makes it one of the most successful performances for the past decade. It premiered on the occasion of the 100th anniversary of the National Theatre and in 2005 was included in the official selection of the International Theatre Festival Varma Summer. This year it is invited because of its 10th jubilee. In it Alexander Morfov undertakes a topical reading of Ivan Vazov’s dramatized novelette “Nemili-nedragi” (Exiles) about the life of Bulgarian pre-Liberation revolutionary émigrés which is underlying for Bulgaria’s national literary and theatre canon.
Everything one can expect from Morfov’s theatre is there: improvisation, unbridled visual imagination, brave upturning of the traditional ideas about Vazov’s characters. Over the year the meanings, echoes and manner of perception of the performance have inevitably changed but its powerful mise-en-scene and vivid theatricality are as captivating as ever. On the stage in the foreign town the outcasts enthusiastically enact their amateur performance, a dress rehearsal for the real one, the one they have gone down in history for…
Director Alexander Morfov (“Don Quixote,” “The Tempest,” “The Lower Depths,” “Don Juan” and others) gain huge popularity in Bulgaria and abroad for his vigorous theatre of improvisation, his original readings of the classics and his ability to engage the whole stage machinery in the theatrical action. Currently he is the director of the National Theatre and also stages performances in Latvia, Russia, etc.
Union of Bulgarian Actors’ 2005 IKAR Awards for best director and mastery of technical accomplishment; 2005 Askeer Award for best performance; 2004/05 Ivan Dimov Award for young Bulgarian talents; awards at 2006 International Drumev Theatre Festival and New Bulgarian Drama, Shumen for best director and best actor; Sofia Municipality’s 2005 Annual Culture Award.