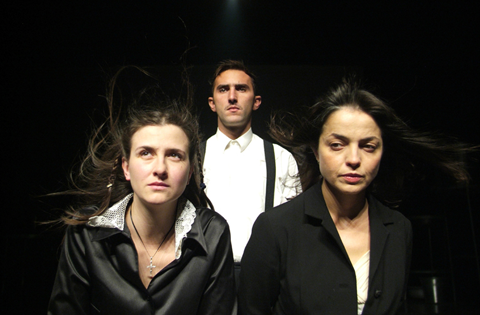 After “Miss Julie” by Augustus Strindberg

Following the laboratory working method of Theatre Laboratory “Sfumato”, co-founded by her, in 2007 Margarita Mladenova staged her adaptation of the play “Miss Julie” by August Strindberg. It set the beginning of the programme “To Damascus” dedicated to the work of one of the most significant authors of theatre modernism. “Julie, Jean and Kristine” has become one of the longest running plays of Theatre Laboratory “Sfumato” as in February 2017 it celebrated the 100th performance in addition to its 10th anniversary on stage. The performance has been played with great success at major national and international festivals in France, Portugal and Romania. It was part of the first edition of the Showcase Programme of Varna Summer Theatre Festival 2008.

Margarita Mladenova’s staging transforms Strindberg’s manifesto-like naturalist tragedy “Miss Julie” into a contemporary hyper-naturalist drama. Her reading is focused on the collision of three worlds: the three different “strong natures” and principles of life of individual characters in a dangerous game of dominance and submission…

“Now we are in the times when civilized barbarian holds the rules of the game, the world is his, everything else is marginal niches sticking to other values…” Margarita Mladenova